Planning to Visit Himalayas of Nepal, Must Know Before Tour

Planning to Visit Himalayas of Nepal Must Know Before Tour

Since the centuries, Himalayas are the source of knowledge and flowing rivers. Great Rishis of ancient time have an immense contribution in the field of non-western epistemology and medicine. Their contribution in the field of Ayurveda and natural medicines marks their significant presence. The growing charm towards yoga is the example of our preference towards Yogis’ contributions who stayed on the Himalayas in search of real knowledge.The Himalayas are the places where you can release your mind from the wordiness and have the direct interaction with a horizon that is free of pollution, massive population, and tensions of your personal life.

Trekking in Nepalese Himalayan route is an incredible journey in life. The heart-arresting beauty of the Himalayan landscape and the cultural integrity with the locals make the journey obviously memorable. In fact, the cold ecological climate, biodiversity, the perfectly beautiful landscapes, and the adventurous journey through the various pilgrimage routes are some of the noteworthy aspects of Himalayan tours. There is no doubt you will frame the inspiring moments and the landscapes in your eyes and camera. 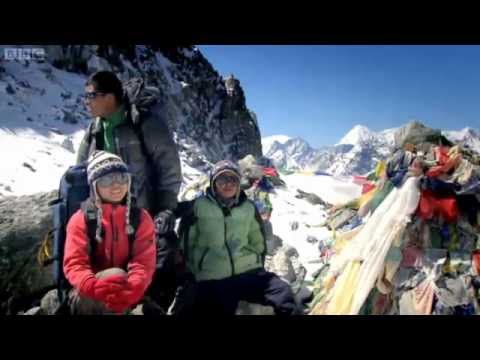 The lifestyle, food habits and costumes of the Sherpa having 145, 000 populations and the Tamangs with 1,539,830 populations are the special cultural assets in the Himalayan range of Nepal. Known as the mountaineering experts these Mongolian indigenous ethnic people are considered as the most innocent people whose lifestyle is rarely ravished by the modern ‘market’. Their thought of universal brotherhood and their behavior full of responsibility makes the Nepalese Himalayan tours easier and more comfortable as well. Sherpa and Tamang ethnic people due to their strong physical abilities and practical knowledge of the mountaineering, work as the assistant, porter and guide for the trekkers and climbers.

Especially ‘Sherpa’ term is now used for any guides, climbing supporters or porters no matter what their ethnic background is.

The 2500 Km-long Himalayan range across Asia that stretches from Kashmir-Nepal-Ladakh to Lhasa. And Nepal is the best destination for Himalayan tour since 8 of 10 highest peaks lies here. Among them, the roof of the world Mt Everest (Sagarmatha, Nepalese name) and Annapurna trekking circuit attracts the largest number of tourists.

Almost 70 percent of the mountain revenue of Nepal alone comes from Mt. Everest alone. The 4th highest mountain in the world Lhotse contributes in in the second position keeping itself safe in the list of second most attracting Himalaya for the mountaineers. Manaslu, the 8th highest mountain in the world is third popular resulting in the third position to generate mountain revenue in Nepal. The cause for its popularity is also due to its growing attraction as second beautiful trekking circuit following Annapurna Circuit. The other mountains that contribute to mountain revenue in the fourth and fifth position are Ama Dablam and Himlung mountain ranges.

Nepalese Mountain Climbing was firstly explored by the Nepalese Tenzing Norgay Sherpa and Sir Edmund Hillary in 1953. Since then thousands of tourist/mountaineers, each year visit this Himalayan nation with the aim that includes mountain flight, trekking up to base camp and second level peaks and trekking to the base camps.

Annapurna, one of the most attractive mountains that lie at the 10th position among the highest peaks was firstly climbed in 1950. It was the first 8000 meters mountain to be climbed. Trekking Annapurna is ideal in the month of October and November. Annapurna I is considered as one of the most dangerous climbing zones since the accident rate is really high in this region. Most of the fatalities are caused by an avalanche. The Annapurna trekking circuit is the best trekking route welcoming a number of tourists.

Himalayan trekking on foot in the dangerous, audacious road and trek through the yak and mule pastures creates the added flavor in the dramatic landscapes. But be sure, the jaw-dropping cold environment requires your good health to cope with the mountains.

Nepalese Himalayas also faced a severe attack due to the April 25 earthquake that killed dozens of mountaineers and destroyed the routes but now it is recovered. The Everest is already open for climbing from the 10th of May and on the 15th day of spring season climbing, 400 climbers successfully climbed the peak following few mishaps. In this season, other 100 climbers successfully climbed other Nepalese Himalayans. In this first season of the year after the last year devastating quake, 1432 climbers got permission for climbing the Nepalese mountains.

Autumn is considered as the best season for trekking and mountaineering in Nepal.

5 Places to Visit in Kathmandu Valley

Pashupatinath temple, a holy site, and a temple dedicated to Pashupatinath, located near Gaushala, along the banks of Bagmati is a major pilgrimage site for devoted Hindus all over the world. Pashupatinath is a reincarnation of lord Shiva and is the ‘lord of animals’. It attracts thousands of pilgrims from all over the world and has become a major tourist attraction as well. Although Pashupatinath is prohibited to not-Hindus, a good view of it can be seen from the opposite bank of the river. It is not known for certain who built the temple but it is believed that Pashu Preksha of the Somadeva Dynasty built it in the 3rd century BC. However, the first historical records date from the 13th century.

Swayambhunath is an ancient architecture at the top of Kathmandu valley, also known as “monkey temple” to tourists, is a shrine built for lord Buddha and is one of the most important Buddhist shrines in Kathmandu valley. According to legend, 2000 years ago, Kathmandu valley was a massive lake with a single blue lotus. Manjushree, the bodhisattva drained the water from Kathmandu with his flaming sword, by slicing a hill, resulting in the chobar gorge. The blue lotus then settled on top of a hill. The Swayambhunath stupa supposedly holds the blue lotus. The stupa’s main entrance holds 365 ancient steps that lead to the steep forested hillside. The base is a twenty-minute walk from the centre of Kathmandu. This staircase is the only route for pilgrims and also to experience the beauty of Swayambhunath. At the bottom of the eastern side is a yellow gate with 12 feet prayer wheel. There are three Buddha statues by the stairs from the 17th century where women perform stretches early morning. The white stupa symbolizes creation and has Buddha’s eyes inscribed which signify the all-seeing Buddha’s eyes.

The Patan durbar square is located in the centre of Patan, which is the oldest among the three cities of Kathmandu valley. The city is situated on a plateau along the Bagmati river with four stupas on four corners of the city, which is said to be built by emperor Ashoka. The Patan Durbar square contains many Hindu and Buddhist temples with pillars, gateways and other architectural monuments. There are countless things to see in the durbar square but a few of the notable things are the Patan museum, Hiranya Varna Mahavihar, Golden window, Maha buddha temple, Golden temple and Krishna temple.

Kathmandu Durbar square is located in the centre of Kathmandu and was where the kings were once crowned and from where they ruled. It had also been listed as a Unesco World Heritage Site in 1979. The Kathmandu Durbar square is also known as the basantapur durbar square or the hanuman dhoka durbar square. It is categorised into three main distinct durbar squares.To the south of it is the Basantapur durbar square area, a former housing for royal elephants, which now holds various souvenir shops and stalls as well as a few cafes. Then there is the prime area of the Durbar Square to the west. At the northeast side of this second part of Durbar Square. It has the entrance to the Hanuman Dhoka and a number of different kinds of temples. From this open area Makhan Tole which used to be the main road of Kathmandu. The Kathmandu durbar square also holds what is know as the Kasthamandap believed to have been built off of a single sal tree. Unfortunately, it was destroyed by the earthquake of April 25, 2015, that also claimed the lives of many people who had volunteered for a blood donation campaign in there.

Bhaktapur Durbar Square is rich in architectural beauty, with lots of Hindu temples, Buddhist monuments as well as palaces or durbars and courtyards. Bhaktapur Durbar Square was also listed on World Heritage Sites by UNESCO in 1979. Some notable things to see there are the Nyatapola, which is fifty-five windowed palace which used to be the seat of royalty prior to 1769.  It also has the national art gallery. Another monument worth seeing is the Taleju Bhawani temple. It was built by Ranajit Malla, the last king of Bhaktapur in the 18th century. It also has a giant bell that was rung to pay homage to the Goddess Taleju and to call the public for  town meetings.