Reasons for Beef Meat in Nepal is Restricted to Eat

Find here some facts, information, and reasons why beef in Nepal is restricted to eat. Beef is not at all eaten by Nepalese as it is taboo and it is greatly abhorred. It is prohibited to slaughter a cow in Nepal as it is the national animal.

Hinduism, one of the oldest religion in the world, is the way of life followed by people of Nepal, India and other south Asian countries. Some of the practitioners and scholars refer it to as Santana Dharma as well. This religion contains a broad range of philosophies and practices. Among all, one of the philosophies is attached with the “Sacred Cow”. According to this philosophy, the cow is admired as the source of food and sign of life and can never be killed or slaughtered. It forbids slaughtering of cows. So, does this also mean Hindus are forbidden to eat beef as well? Can’t Hindus eat beef due to religious teaching? To answer this question, we need to study different perspectives.

Hinduism does forbid slaughtering cows, however, the bar against beef eating roots from a practical standpoint. From a farming standpoint, a cow is an animal that is very important. So, imposing a ban on cow and bull slaughter is just a practical way of ensuring agricultural productivity. However, there is no written rule in Hinduism that forbids Hindus from eating beef at all.

An objection to eating beef prevails among Hinduism since centuries. It is probably because the cow is a lovable domestic animal, highly valued by agriculturists and pastoralists who uses not only milk and milk products but also cow’s urine and cow dung for their medicinal values. The five products of cow- Milk, Ghee, Curds, Urine and Dung- all are used in puja as well as in rites of extreme penance. Hence, considering the uses of cows, out of respect, Hindus don’t eat beef.

Similarly, the Hindus of Nepal worship cow each year During Tihar (Deepawali) festival believing it a god. As per the mythology, cows and Lord Vishnu are considered identical and slaughtering cows or eating it is regarded a disrespect of got itself. Also, the cow is the national animal of Nepal and people of Nepal, be it Hindu or people following other religion, all have huge respect for cows. So, from this standpoint, most of the people who follow Hinduism religion don’t eat beef or beef products.

Along with this, the Hindu dominated countries like Nepal and India are agricultural countries. The economy of these countries is dominated by agriculture. The livelihood of most of Nepalese and Indian is on agriculture and cows are the axis for doing agriculture. Hence, people have huge respect for cow due to which they do not prefer eating beef or slaughtering cows.

From the above-mentioned perspectives, the Hindus do not prefer eating any form of Beef or beef products as they have huge respect for cows. However, as per Hinduism, there are no any rules regarding the path to follow. Every person has the freedom to define truth according to his perspective. So, rather than saying Hindus are forbidden to eat beef, we can say that Hindus do not believe in slaughtering cows and eating beef. The ban on eating beef comes to Hindus from the practical standpoint rather than from the prescribed norms, rules or religious teachings.

Nepalese people are fond of eating meat. Nepali are very curious to eat meat. Nepalese eat meat once a week in the average earning family. Mutton, chicken is most used meat in Nepal. In   Nepal,   the meat of male goats   (mutton)   and sheep   (lamb)  is generally eaten.

The meat of big animals such as a horse, a camel, and an elephant is looked upon with disgust. Such type of meat is also not sold in the Nepalese market. Nepalese people generally don’t sell meat three days in every month. These days are once on the dark moon day and the other two times on the eleventh (Ekadasi)  day of each fortnight. Ekadashi is known as the holy day in Nepal. Ekadashi falls on the 11th day of every fortnight.

Slaughter of any animal is forbidden on these days. The holy days of Ekadasi are connected with the worship of Lord Vishnu. Meat is a religious taboo on these days and on some other important festivals such as Maha Shivratri, which is celebrated in the  month  of Feb./March (Falgun), Ramnawami which falls on the 9th  day of the bright half of the month of March (Chaitra), Krishnashtami, which falls on the eighth day of the dark fortnight  of August or early September (Bhadra) and Baisakh Purnima in Baisakh which is the anniversary day of Buddha. 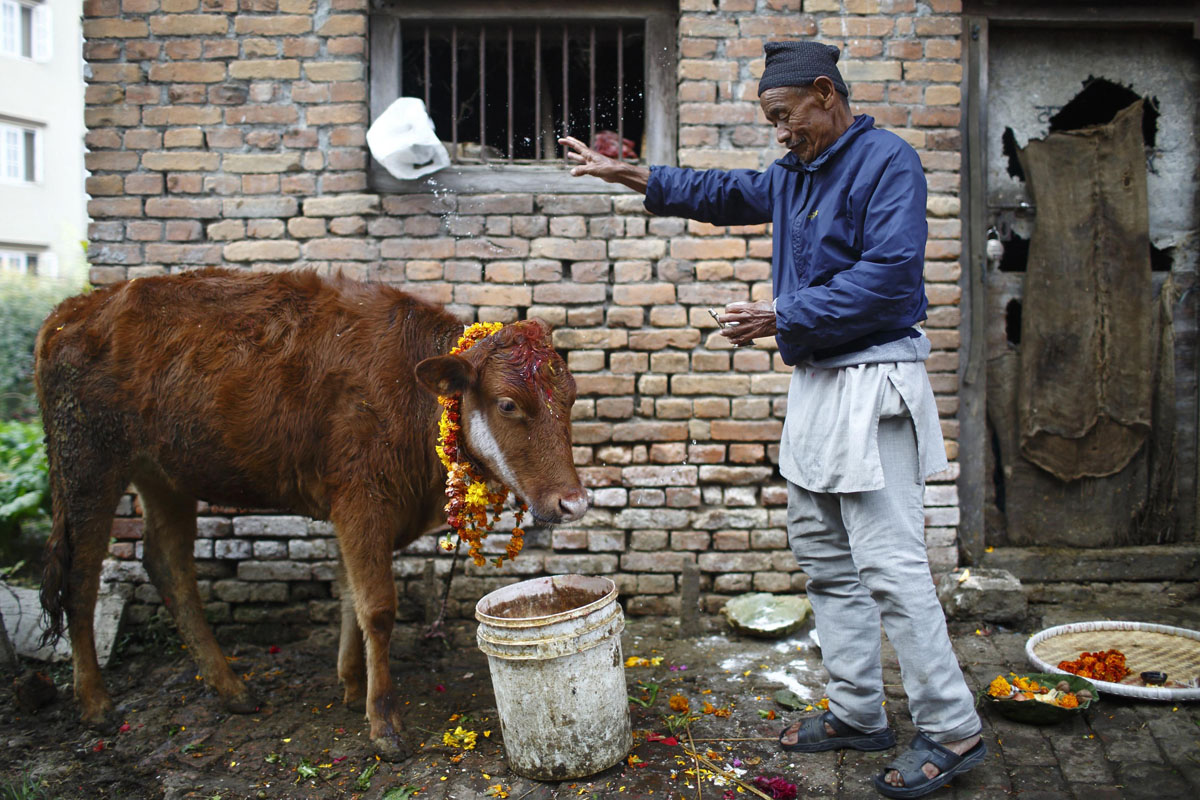 Mutton sold in the Nepalese market has also got the skin on it, of course with the hair removed as Nepalese like meat with skin. Chicken, buffalo, and pork are also eaten by Nepalese. Chicken is very much relished by all meat-eaters. Buffalo meat is eaten by Newars, Magars, and Tamangs. Chetris and Gurungs do not eat buffalo meat. Some Brahmins do eat meat but not chicken. They, however, eat men) of birds, especially of pheasants,   Kalij (wild fowl), ‘hyakhuro (quail).

=> How to Say Happy Father’s Day in Nepali : 5 Wishes Examples

=> Why Do We Celebrate Father’s Day? Here Are 33 The Most Accepted Reasons That No Child Can Ignore